The River Bjerkreim Riparian Owners’ Association (Bjerkreim Elveeigarlag – BEEL) was established in 1950. The association currently represents the majority of the riparian owners from the lower reaches of the river at the boundary with Eigersund commune and upriver, to above the Svelavannet, the lake at Vikeså. At this point, the river is fed from two branches: one that emerges from above Skjæveland, and the other which runs down from Håfreistevatnet. In total, this amounts to 54 kilometres of fishable water. A hatchery has been in operation at Vikeså for many years: it is owned by the BEEL, and Bjerkreim Hunters and Fishers Association (BJFF) has been responsible for its practical operation. Until now, most of the proceeds from the sale of fishing permits have been reinvested in river regeneration.

The Fotland Waterfall is situated in the lowest reaches of the river, and it is here that the first salmon ladder was built at the turn of the century. In 1976, BEEL commissioned a new salmon ladder.

Today, the River Bjerkreim is ranked amongst the five most important salmon rivers in Norway, and in 2000 the catch rate for salmon and sea-trout amounted to approximately 14 tonnes. In the past few years, the river has “blossomed”. This has been due, in part, to the huge liming project that was started in 1996. There is an abundance of wildlife on the banks of the river, and many beautiful sights to be seen in the river valley.

BEEL is a member of the Norwegian Salmon Rivers Association. 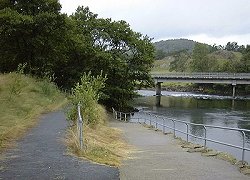 The fishing season starts on the 15th June and lasts until the 20th September inclusive.

Fishing for the disabled

There is a purpose-built facility for the disabled in the vicinity of the rest area at Gjedlakleiva/E39, and this provides good access to the river.

Designed by Sircon Norge as.